Before and After Pictures from Thornhill

Many kids spend time in the summer with their grandparents. Of course, this can be to the delight of grandma and grandpa and sometimes to the grandkids, but the entire group gets to make cherished memories.

In Markham, Ontario, a couple was looking forward to having their grandchildren spend a few weeks with them in the summer, but there was one problem; the concrete around their pool was sinking, creating numerous trip hazards. They wanted the kids to wander and enjoy the space, but they were uneasy about the raised edges.

They reached out to Canadian Concrete Leveling and met with Project Manager Kyle O’Brien. Kyle inspected the pool deck and explained that draining water could cause loose-fill soils to wash away, leading to sinking concrete. He walked them through our PolyLevel® System, which uses expanding polyurethane to list sinking slabs. He also told them about our NexusPro® Sealant, a UV-resistant sealant used for seams and cracks. The couple was excited to hear about our non-invasive solutions and eagerly agreed to both options.

Foreman Kyle McKeown started the morning repair by drilling dime-sized holes in the slabs as injection ports through the slabs. Next, he pumped the two-part PolyLevel®, and as it mixed, it expanded to lift the concrete above. Once the pool deck was back to a safe level, he sealed the seams between the slabs with NexusPro®, providing a flexible yet watertight seal.

The grandparents were amazed by the work we were able to do and even more blown away by the fact it was done in only a day. They can’t wait to have some peace of mind while they entertain their grandkids in the summer!

A driveway is an integral part of your home and is used almost every day, so it’s not something you want to be tripping over.

A Thornhill, Ontario, customer gave us a call after noticing his driveway was sinking where it met the garage floor. He was concerned someone would trip and fall at some point, so after meeting with Project Manager Joe McColl he decided to bring us in to complete the repair.

Foreman Bill McKeown used our PolyLevel® solution to lift the concrete driveway back up to grade with the garage floor. He used dime-sized holes to inject our high-density polyurethane in various spots to slowly lift the slabs until they reached the proper grade.

With his tripping hazards gone, the customer is looking forward to using his driveway again. He’s impressed with how efficient our installation process was and appreciated the service he’s received.

A home in Thornhill, Ontario, had a problem in the basement along the front wall. There was a small amount of water coming into the home. This happened after a heavy rain because the concrete slabs at the entrance way had settled toward the home. Water flowed toward the home and made its way into the basement. The slabs were also a trip hazard. The house was being used for a business and was going to be sold. They wanted to fix the issues before selling it.

The homeowner called Canadian Concrete Leveling to fix the issues. Ron Monk inspected the area and explained how the job would be done. Billy McKeown and his team came in and used PolyLevel foam injections to divert water away from the foundation and eliminate trip hazards. They used NexusPro to seal any joints where water could penetrate. The customer was satisfied because the house was ready to sell without issue.

Your Trusted Concrete Leveling & Repair Experts in Thornhill, ON

Click the icons to see what our customers had to say.

Durable concrete repair in Thornhill, ON

Did you know that unstable soils can cause your concrete steps, patios, pool decks, and more to crack and sink? At Canadian Concrete Leveling, we offer 20 years of combined concrete repair experience. With efficient customer service, innovative solutions, and proven products, we restore slabs for homes and commercial properties in Thornhill, ON!

Get A FREE Quote!

If you have damaged, sinking concrete slabs around your home or business, then they are doing more then making your property look unappealing. As a falling hazard, they can also cause a serious liability issue.

With these factors in mind, most property owners understand the importance of concrete repair services but are turned off by the idea of a messy, complicated, and disruptive job. Good thing Canadian Concrete Leveling provides PolyLevel, a simple injection system that provides a no-mess, precise lift and produces long-lasting results!

Contact us today to schedule a free concrete leveling estimate for your Thornhill home or commercial property!

Cracked concrete is unsightly and lowers the value of your Thornhill property. Don't fret, Canadian Concrete Leveling is here with an innovative concrete sealant that restores cracked driveways, pool decks, sidewalks, and more, all while providing long-lasting flexibility.

Our NexusPro concrete crack repair solution can be installed all year-round and is ultra-durable, resistant to harsh weather, UV rays, and more!

To learn more about our innovative concrete crack repair solution or to schedule a free estimate, contact us today!

To schedule a free concrete sealing estimate in Thornhill, ON, contact us today!

If you want durable concrete repair services but don't want to deal with the mess, distraction, and costs that come standard with other contractors, Canadian Concrete Leveling is the solution. We offer concrete leveling, concrete crack repair, and concrete sealing with attentive customer service, innovative solutions, and proven products.

To schedule a free concrete repair estimate for your Thornhill home or commercial property, click below today!

Get A FREE Quote!
Case Studies From Thornhill 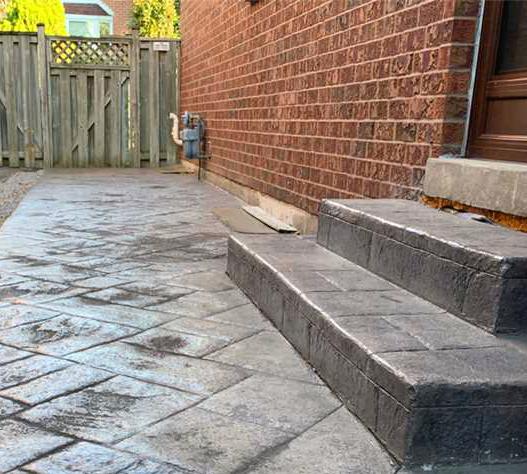 It’s a truly Canadian experience, but not an enjoyable one. You’re pushing your shovel along the driveway, clearing off that day’s...
Click to read solution...
More Case Studies
Photo Galleries From Thornhill

Settling of the concrete slab causing water to leak into the home.

The slab was lifted with Polylevel, leaving the gap under the trim non existent.

A home in Thornhill, Ontario, there was a problem in the basement along the front wall. There was a small amount of water causing the carpet under a desk to be wet. This happened during a very heavy rainfall. This was a result of concrete slabs at the entrance way to the building that had settled toward the home. Water flowed toward the home and made its way into the basement over the top of the foundation. The slabs were also a trip hazard. The house which was being used for a business was going to be sold and they didn’t want to pass along an issue to any buyer.  It could affect the resale value of the property as well as continue to cause damage to building materials.

The homeowner called Canadian Concrete Leveling to fix the issues before they worsened. Ron Monk inspected the area and explained everything that would be done. Billy McKeown and his team came in and used PolyLevel foam injections and NexusPro. The products were used to divert water away from the foundation and eliminate trip hazards and also to seal any joints where water could penetrate. NexusPro sealant was used to seal the joints to keep water out from indoors. The customer was satisfied because the house was ready to sell without issue.

The front entrance stairs steps of my house is out of shape. I would like to have an idea how much it would cost to fix it. Do you have an email address where I can send the photos? Also, please contact me through email as I usually do not pick up calls. Thank you.
Project Location: Thornhill, ON

Patio in rear of home has sunk about 3".
Project Location: Thornhill, ON

Cement at entrance to house has sunk about 4" . Also, now leaving space beneath cement porch.
Project Location: Thornhill, ON

Sidewalk is uneven. Looking get it fixed
Project Location: Thornhill, ON

We have a enclosed breezeway (with wall-to-wall patio doors on one side) between the garage and the house with a concrete slab floor. The concrete floor has sunken out of level from the wall on one side.
Project Location: Thornhill, ON

Concrete is breaking up in front porch
Project Location: Thornhill, ON

My concrete porch is sinking
Project Location: Thornhill, ON

Concrete flooring in the garage is not level, seem to be getting more and more severe.
Project Location: Thornhill, ON

3 foot wide concrete border to the far side (away from the house) of my swimming pool for approximately 50 feet length has sunk about an inch
Project Location: Thornhill, ON

I would like to fix my cracked garage floor which is also uneven in various places.
Project Location: Thornhill, ON

Concrete deck around pool is sinking
Project Location: Thornhill, ON