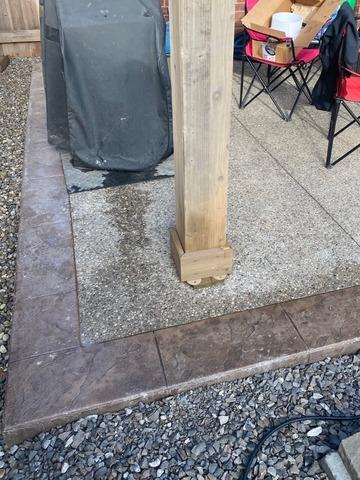 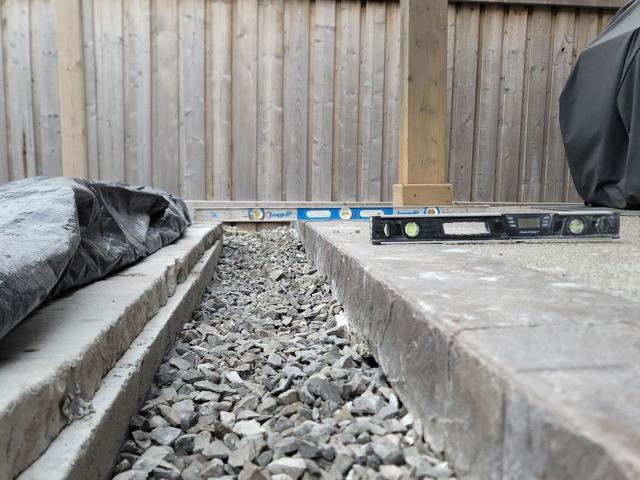 This family home in Binbrook, Ontario, had a new gazebo put in their backyard for family dinners and to entertain their guests in the summer. Unfortunately, not long after it was built, they discovered that the concrete below was sinking making the homeowners concerned for the gazebo’s stability.

Installation Specialist Kyle McKeown and his team used our PolyLevel® Polyurethane injection to bring the slope of the concrete back to its original level. This allowed the family to get back to enjoying their new gazebo within hours of installation! They were so pleased with how easy of a fix-it was, and they did not have to put a dent in their bank accounts to replace the concrete.

Sinking concrete all over this home, Hamilton ON 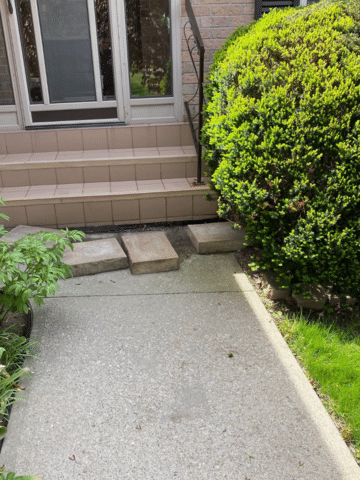 In Hamilton, Ontario, this home had sinking concrete all over the house – from the stairs, the driveway, and the side walkway. The homeowners were very concerned about the multiple spots for uneven concrete since they could trip on either one. A solution was needed, but they wanted to find the most permanent, cost-effective, and minimally invasive levelling process.

After seeing our social media content and referrals, the homeowners knew they wanted to choose Canadian Concrete Leveling to fix their concrete troubles. After the initial inquiry, we were able to send our Project Manager, Matt Ruskin, to the home and draft up a quote. Our polyurethane injection method is the most inexpensive yet durable solution for concrete levelling, blowing the owners away. Matt quoted our PolyLevel® to be done at the lowest concrete points, especially at the front staircase. On a later day, our installation team, Kyle and JP, came to the home to begin levelling the concrete. Thankfully the work did not interrupt the daily foot traffic of their home, and since they worked in sections, they were hardly in the way. The work was done seamlessly, and the result shocked the owners since it looked like the concrete that was originally placed. 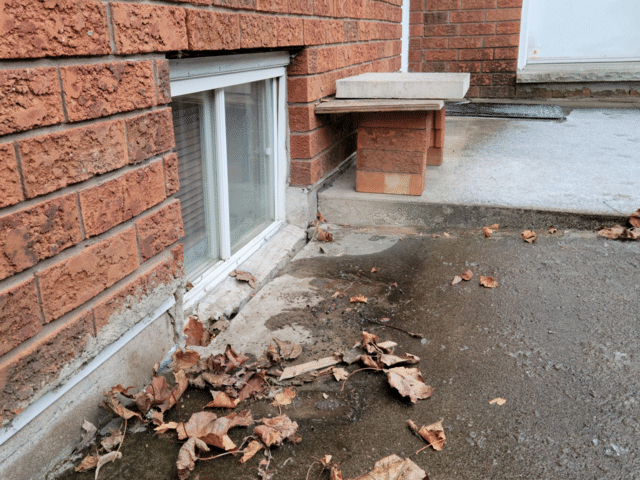 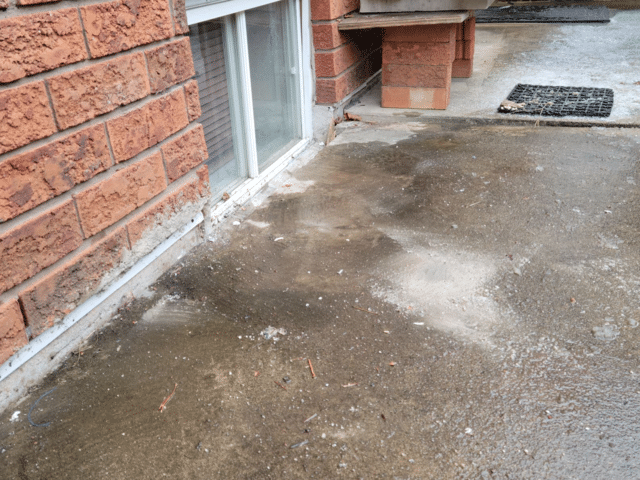 Our client in Burlington, Ontario, had a driveway that was a tripping and water pooling hazard. This driveway was bowing toward the house, causing a hazardous lip when entering the front entrance and exposing the home’s foundation. The sloping also left the basement door vulnerable since the foundation underneath the windowsill was exposed too. As a result, the whole side of the house was essentially susceptible to water. This problem had to be fixed as soon as possible to avoid intense foundation repairs. With the help of Project Manager Danny Dos Santos giving schematics and a plan, and Installation Supervisor Bill McKeown, the problematic driveway was fixed in under 15 minutes, thanks to our PolyLevel®!

Tripping Hazard Outside of Insurance Brokerage in Burlington, Ontario 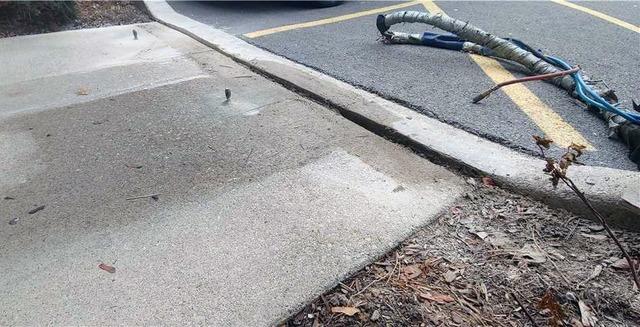 Insurance brokers know better than anyone the severity of a tripping hazard at a business. They deal with these types of claims every day, so they understand the issues that can come from uneven concrete.

A general contractor in Burlington, Ontario, had recently remodelled his insurance broker’s office. The broker had been dealing with a tripping hazard caused by settled concrete that he wanted dealt with.

The contractor reached out to Canadian Concrete Leveling looking for a solution and met with Project Manager Paul Mendell. Paul showed them our techniques and solutions, and a date was set for the repair.

Foreman Kyle McKeown used our PolyLevel® high-density polyurethane to lift the concrete back to its former grade. PolyLevel® takes minutes to cure, and the concrete can even be walked on the same day as the installation.

The owner is extremely happy with the work performed. His customers no longer worry about tripping, and the work didn’t interfere with his business. The contractor was also very impressed with the work done by Canadian Concrete Leveling. 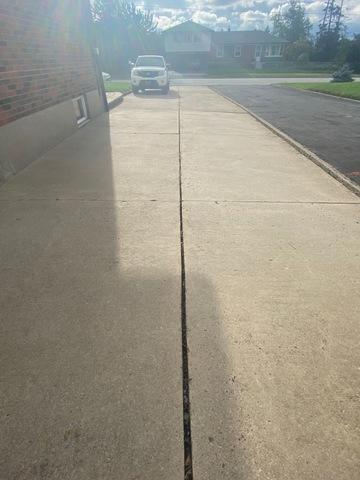 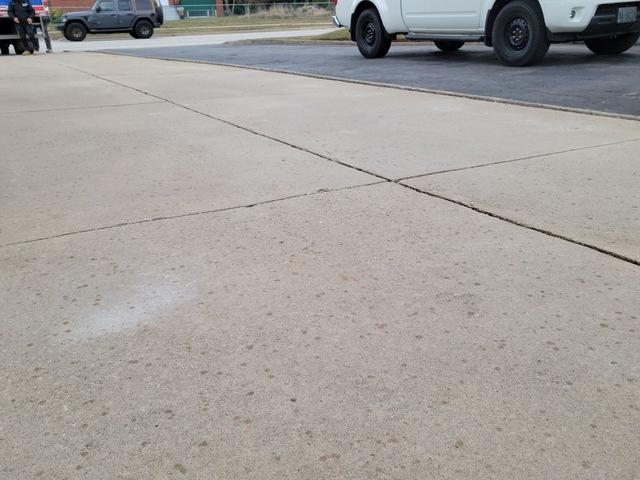 Here in Oakville, Ontario, homeowners had a sinking driveway on the left side. You may be thinking that it's a good thing a driveway would be sloping since it pushes water in a different direction from the house, but it had been highly inconvenient for the homeowners. With cars sitting sideways and shovelling snow off the sinking concrete challenging, this driveway's new shape wasn't good for the homeowners. However, they were left at ease with Canadian Concrete Leveling's Project Manager, Danny Dos Santos, helping the clients with an alternative to getting new driveway slabs.

Our Installation Specialist came on a later day to lift the slabs to their original position using our PolyLevel®, high-density polyurethane. The process took little to no time, and the driveway could be used almost immediately - another functional driveway in the neighbourhood.